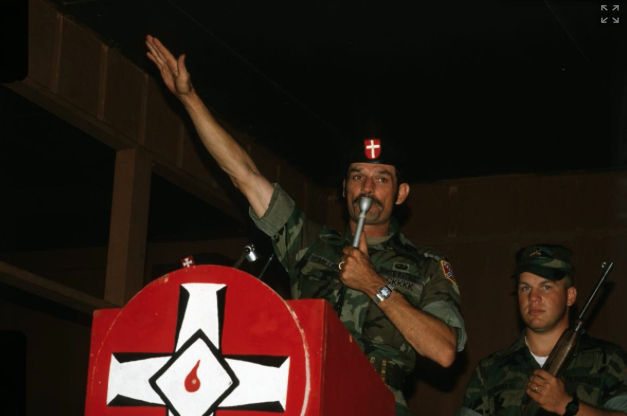 I warned those SOBs. Since December 20th, 1980 when I formed the Carolina Knights of the Ku Klux Klan, I have pleaded with the federal dogs to leave me alone and to allow me to work peacefully and legally within the system for my Race. At hundreds of meetings I have pleaded with our members to obey the law and to work within the system. You all know this to be true. All I ever wanted to do was to work for my Race and for the future of my children and for the children of my People. I always said that once we had 1,000 White men in uniform marching in the streets on a regular basis, that the masses of our People would flood into our ranks and join with us. The federal dogs and their Jew masters knew this too and refused to allow it.

That's why they destroyed the White Patriot Party on July 25th, 1986 when they used desperate convicts seeking federal favors and lying ambitious federal agents to obtain guilty verdicts against myself, Stephen Miller and the WPP. Their star witness Robert Norman Jones who testified that he had met me on 3 occasions, and that I had given him $50,000 and instructed him to obtain stolen and illegal weapons and explosive and to train members, lied throughout the trial. I had never before in my entire life even seen Robert Norman Jones prior to the trial, and I underwent a lie-detector test after my trial to prove it. I was innocent but found guilty because of lies purchased by the Justice Department and the Southern Poverty Law Center. I do not forgive them.

The Zionist Occupation Government (ZOG) conspired to violate all my basic constitutional rights which enabled me to work successfully and legally. Since July 25th, 1986 I have been under ZOG orders not to have any contact whatsoever with any WPP members, or former members, nor with any of over a dozen White Rights organizations. This, of course, took me out of the Movement, and effectively stopped the White Patriot Party, and organization which took 6 years of my life to build.

ZOG has proven by his deeds against me and the WPP, that he will not allow effective White resistance above ground, without a below-ground force to back it up. Two years ago, I held a press conference in downtown Raleigh, NC which was published throughout the country. I stated that if ZOG framed, entrapped, and/or imprisoned our leaders on trumpted up charges, that the White Patriot Party would declare war against ZOG, because war would then be our only hope for the salvation and instauration of our Race. All 5,000 White Patriots are now honor bound and duty bound to pick up the sword and do battle against the forces of evil. In the name of our Aryan God, thru His beloved Son, I Glenn Miller now this 6th day of April, 1987 do hereby declare total war.

I ask for no quarter. I will give none. I declare war against Niggers, Jews, Queers, assorted Mongrels, White Race traitors, and despicable informants. We White Patriots will now begin the Race War and it will spread gloriously thru-out the nation. We will cleanse the land of evil, corruption, and mongrels. And, we will build a glorious future and a nation in which all our People can scream proudly, and honestly, "This is our Land. This is our People. This is our God, and this we will defend."

I realize fully that I will be caught quickly. My face is too well known, and ZOG will send his best goyim slaves against me. But, it is different for you. Remember, "Man is mightiest, alone." Do not be discouraged when I am gone. ZOG will soon have my dead carcass, but I will die with contempt upon my lips and with sword in my hand. My fate will either be assassination or the death penalty.

I order my 3 young sons, Glenn III, Jesse, and Michael to swear upon my grave to take my place in battle, when they come of age. And, I order you as members of the White Patriot Party and/or the Aryan Race to declare war against our enemies now, and to swear you'll not put down your swords until total victory is ours.

Go no, you sons of Odin, you sons of our courageous Viking fathers, and of our Confederate kin. Go, now and smite your enemies. Our God, Yahwey who created us will be with you always. Pray to him each day, and He will guide and protect you. It is not hard, brothers and sisters. Once you have made up your mind, it is easy. Triumph over your fears. Yahwey will fill your hearts with courage and strength and confidence. Become warriors. Let the blood of our enemies flood the streets, rivers and fields of the nation, in Holy vengeance and justice. It is time. Millions of our People lying in their graves cry out for you to act. They demand it, and it shall be given unto them.

The Jews are our main and most formidable enemies, brothers and sisters. They are truly the children of Satan, as Christ tells us in St. John 8:44. The Jews are destroying our Race thru-out the world. He who fights the Jew, fights the devil. He who refuses to fight will invoke the wrath of Yahwey.

Our brothers, Stephen Miller and Tony Wydra are now in ZOG's dungeon, without bond. Tony is only 19 years old and the charge against him only carry a 5 year sentence, but yet ZOG keeps him in chains to punish him for being a proud White man. Neither are guilty as charged. Just prior to Steve's arrest I asked him to go underground with me. He refused, saying he would try and fight ZOG in the courts and would not resort to illegal activities.

I hereby invoke the following orders issued by our founding fathers. "We hold these truths to be self-evident, that all (White) men are created equal, that they are endowed by their Creator with certain unalienable Rights, that among these are Life, Liberty and the Pursuit of Happiness – That to secure these Rights, governments are instituted among Men, deriving their just powers from the consent of the governed, that whenever any form of government becomes destructive of these ends, it is the right of the people to alter or to abolish it, and to institute new government. – When a long train of abuses and usurpations, pursuing invariable the same object, evinces a design to reduce them under absolute despotism, it is their right, it is their duty, to throw off such government, and to provide new guards for their future security."

The preceding was a declaration made by the United States Congress on July 4th, 1776, in general congress assembled.

I, Glenn Miller, leader of the White Patriot Party, do hereby declare the separation of the glorious Southern States of the Confederacy, the land where our fathers lay buried, to be totally and absolutely separated from the Satanic Jewish ruled federal government of the U.S., because said government is now, and has been for decades, in a conspiracy to not only enslave our White Race, but to destroy our Race and Christianity, as well, It is not only our right, it is indeed our duty to rise up and throw off the chains which blind us to the satanic, Jewish controlled and ruled federal government. This Race war can not begin by my actions alone. You too must strike. This Holy War will quickly spread thru-out the Southland and the nation, but only if many of us strike. 100,000 White activists will read this letter. 5,000 will read it directly from my mailing, and I ask every White leader to printed it in their own publication. Louis Farrakhan called for war against Whites, and the Jews publicized it in every newspaper, TV station, & radio station in the country. Freedom of speech and the press says that do so, is a coward. These leaders told us for years what the Jews and Mongrels are doing to us. How dare they refuse to print this latter or to criticize us for becoming warriors against the culprits. I realize there must be above-ground organizations, and that must work legally within the system, but without the underground now begun by the WPP, they will suffer the same fate as myself and the WPP. I realize too, that many so-called White groups will attempt to distance themselves from us and they will scream criticism upon us. They are cowards and fools, foaming at the feet of the Jews, and offer no hope or solutions to our People.

We offer peace to all White law enforcement officers, but we promise death to those who attack or who attempt to place us in ZOG's dungeons. We ask them to allow us to save their Race and create a future for their children.

Cecil Cox, Gordon Ipock, and Richard Pounder know absolutely nothing of this declaration nor of any illegal actions. I apologize to Celcil for the many evasive conversations I had with him since I decided on this action. They must remain legal and above-ground to educate the masses of our People.

And so, White brothers and sisters, I order you to now do your duty. Wage war against your enemies. Those who refuse will face the wrath of our God who orders me. Strike the SOBs, for your Race, your Honor, and our God.

I ask Cecil Cox to do the following for me: Bury me in the Miller graveyard near Dillion, SC, in my WPP uniform. I want my right arm raised in the White Power salute, and the following songs played in order: Tomorrow Belongs to me, The Old Rugged Cross, Ride of the Valykarie, and Dixie. And, I ask that with the God who made me and with Aryan warriors in the heavens. I ask God to forgive me for my sins and for being so slow to battle. Farewell, White Patriots. I'll see you there. Let the battle axes swing smoothly and the bullets wiss true. So help us, God Almighty.
at June 12, 2020