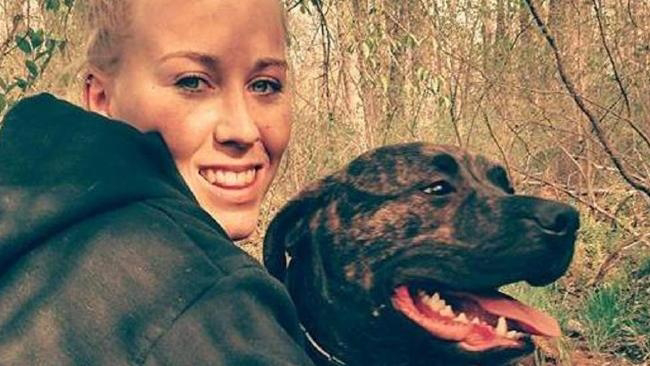 I've been crossing the street for a few years as this latest trend gained traction. After all, who and what at this point is willing to tolerate White Women besides pitbulls? Even niggers can't stand them, which is exemplified by the large influx of miscegenation that equates to single motherhood. Either way, it all seems to correlate with bestiality.

As I was saying, I find myself cautiously crossing the street more frequently now since White Women can't hold on to a nigger. Their next logical step is the pitbull. This current trend has reached its peak, my zip code along with the surrounding areas are literally infested with this latest, dangerous phenomenon.

The White Woman is unequivocally high IQ. All the data and statistics are meaningless to them when it comes to pitbulls. I know for a fact these dogs maul and oftentimes kill children. I'm well aware of how aggressive they become when in the vicinity of another animal. Does the White Woman who has an Air Jordan fetish take this into consideration? Absolutely not. Her nigger replacement dog would never lash out!

The White Woman is sooooooo high IQ that she even permits her small, fatherless offspring to take leisurely walks with these volatile beasts. It's commonplace in my own neighborhood. And just to think, five years ago this was such a nice and friendly place to live, but I digress. All it takes is for the pitbull to spot another animal, especially a dog, and it's over. The little kids walking these pitbulls can't be no older than ten. Please explain how a child will be able to maintain control of an unpredictable dog like that?

The pitbull first gained prominence in the hood. At least up here in Pittsburgh. Now however its permeated the politically correct suburbs, and became a symbol of tolerance. I'll put it like this, a White Woman walking a pitbull is the type of woman to give me filthy looks, like I haven't taken a shower, as she blares Kanye West and orders extra ranch for her pizza. She's also the stereotypical retard who has signs prominently displayed in her yard that read: No matter where you are from, we're glad to have you as our neighbor. Meanwhile, niggers couldn't afford the property taxes, and as we've previously noted, only use White Women for an orgasm.

Well the good news is, I haven't been attacked by a pitbull recently, or its distant cousin, the nigger. So I'm ok there as long as I continue to cross the street, and never walk through the doors of Popeye's Chicken. White Women on the other hand are on a mission to prove how Anti-Racist, i.e. Anti-White, they are by engaging in bestiality.

Call me a racist asshole all you want, bitch. I hold my women to a higher standard, a standard they've perpetually failed to maintain. I expect more than my life to be jeopardized each time I leave the confines of my home by virtue signaling White Women who enjoy extra ranch with their hot wings. How many pitbull attacks are enough? How many bodies have to be zipped up in body bags until you're satisfied?

If I was your father, I would hate you!

This is your world on Jews.

Email ThisBlogThis!Share to TwitterShare to FacebookShare to Pinterest
Labels: #whitewomen

These whiggeress skanks usually have an ample amount of shitty tattoos as well.