The Must Read Hitler Speech (Fiction) 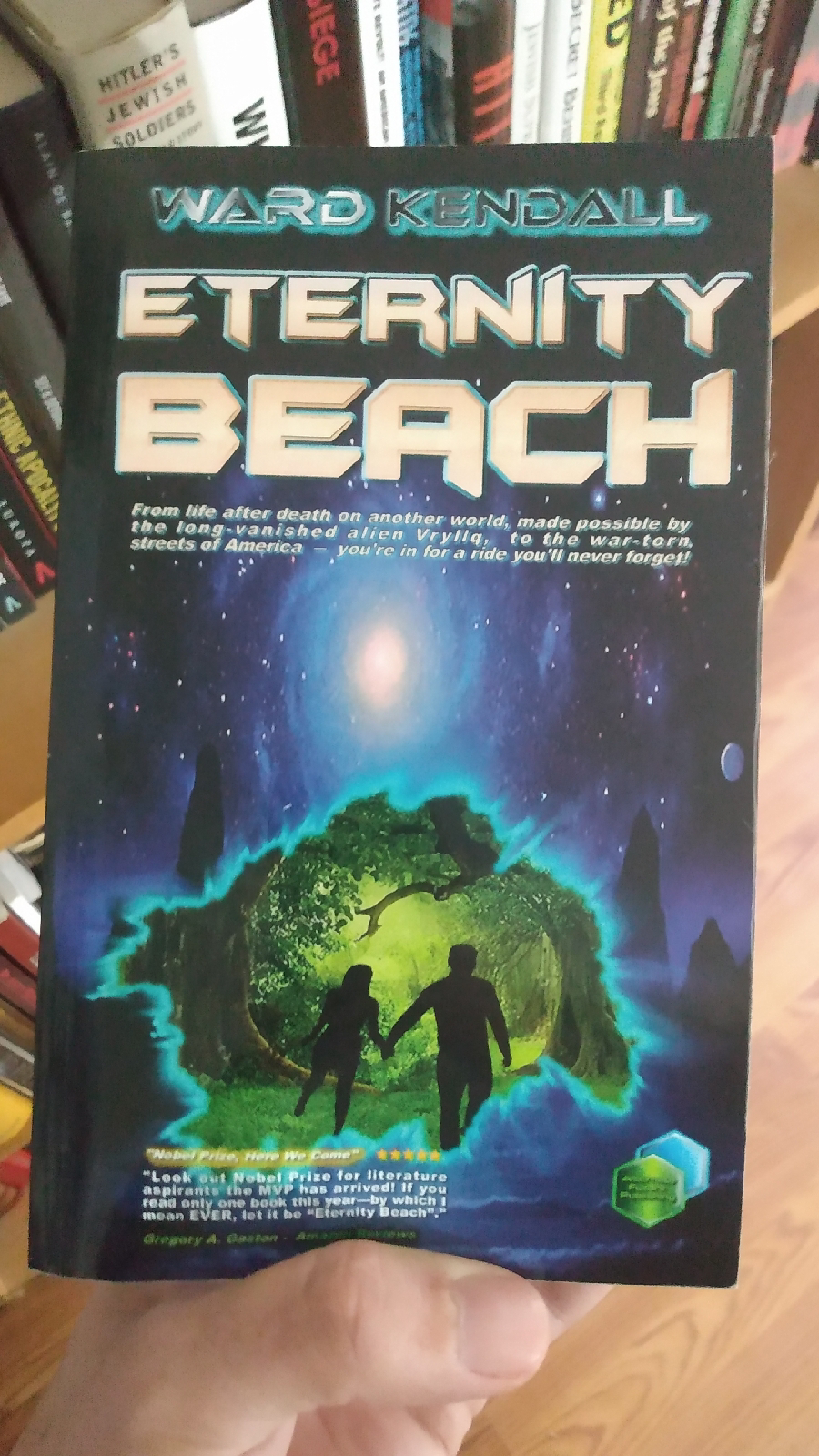 "From the poisonous mustard gas of World War 1 to the poisonous chlorine gas of 61 Cygni, I have made an epic journey across time and space the likes of which no other man before me. God or not, there must be a reason. I believe that reason is here, surrounding me - surrounding us. And that reason is clear: that man was intended to be a heroic being, an Olympian God, as our earliest European history has shown.

"This I have always insisted. It is why I first sought to be an artist, during my long ago days wandering the streets of Vienna. For through art we Aryans can reveal the best within our souls, and achieve what only we are capable - exaltation. As a prime example, one need only compare negro art to European man's. What do we find? Rubbish, and more rubbish. Savage, ape-like crudity. This is because Art springs from the deepest wellsprings of the human soul, and thus reflects the negro as a savage, primordial, subhuman beast.

"The Asiatic is but little better, with his flat, two-dimensional geisha girls and delicate tea houses. Charming, perhaps, much like a talented child's artwork can be charming. But Asian man never rises to the full, rich adulthood depicted so gloriously in European art and sculpture.

"And then there is the Jew. What to make of him? each of you may ask. Intelligent, at times, even talented. But lest any of us forget, the Jew that European man has come to know, to his everlasting regret, was never the same one that act out a precarious living in the hardscrabble, sunburned deserts of the middle East, thousands of years ago.

"No, the Jew that came to be our mortal enemy is a dangerous hybrid, a synthesis of European man and swarthy desert nomad, driven by ancient Semitic urgings while living among their rival camel floggers, the cutthroat Arab. Against the Arab, the Jew had to find a way to survive. And he did, by cunning and deceit, deception and fraud. For only such a being as the Jew could have created the world's most psychologically addictive religion the world has ever known.

"And when was it created? During the same time when Europe's second great Aryan power, following after the Greek, came into being. this was the mighty Roman empire, by which all other empires came to be judged. Strong, manly, vital with the fiery elixir of life and the lusty pleasures of carnal desire; the Romans were everything the skulking, devious-eyed Jew was not, and never would be. For his was the power and glory, from the noble Centurion standing on the marble steps of the Roman Forum, to the mighty Caesar, with his thousand year visage, looking out to the sea.

"These Romans, with their unparalleled art and science, their magnificent architecture, their stunning sculptures as beautiful today as two thousand years ago, their philosophy, wisdom, and mathematics, spread into the Middle East, into the land of the Jew.

"Imagine the contrast, although both the Roman and the Jew had been given the same time on earth. The Roman, with his heroic chin raised to meet any challenge. And then the Jew, whose first encounter with the Roman visage had instead reflected back his own shortcomings, as if he had gazed into a mirror. And what he saw was repulsive. Physically, undeniably repulsive. Short, swarthy, grizzled, garbed in foul-smelling rags filled with the stench of goat and camel and his own unwashed body; in short, a filthy, two-legged wastrels of the hot, worthless sands.

"And in that first encounter, his hatred for Aryan Man was born. For the Jew, all he could do was toil, and he did not like to toil. While others built pyramids, he stood and hated them for it. But the mighty Roman...He not only built cities of soaring beauty and temples of glowing light and shinning gold, he also peopled his temples of beauty with golden-haired damsels; damsels who stood upon marbled terraces gazing out over sweet fields of grain, golden in the sun, or across sun-dappled hills, bounteous with olives and gigs and dates, irrigated with Roman technology the lowly Jew could only sneer at, but never guess at its cause...

"The cause was Aryan Man. Borne of European soil, Aryan Man like no other human being who had ever walked the earth. And the Jew instinctively knew this, the first time his dark visage set eyes upon him. As the Roman spread into the Middle East, all scattered before him. What, the Jew asked, do I have that the Roman does not? And, after thinking long and hard, and desperate to come up with something, he came to one conclusion: he had a paradise.

"Paradise, that place beyond all the toil, all the disease, all the quick and early death that awaited, there among the hot and unforgiving sands. "But where is it?" the superstitious Jew asked his brethren. "Nowhere and everywhere," came the quick reply. And thus Jew logic and Jew religion melded into one, and came into being.

"But even the cunning Jew could not abide another cunning Jew from laying exclusive claim to this new concept, this new Paradise that no one could touch, see, or hear, with less substance to it than the beat of a gnat's wing. But the Middle East was a cesspool of superstition, and so the Jew only had to say it was so, and so it was...

"And thus came Jesus Christ, the Yahweh, the Holy One, the 'Son Of God'. What God? It didn't matter, because none of it was real. For superstition reigned supreme during that sand-blown antiquity, as it still does today. And thus the Jew, in the person of Jesus Christ, came face to face with the Roman. Instantly, the Roman saw him for what he was: a mentally-ill nomad of the desert, a psychotic wanderer gibbering to unseen entities, vilified here, praised there, but in the end nothing more than a short, dirty, ragged excuse of a human being.

"But with the coming of Jesus Christ the Jew laid claim to the only thing of worth he possessed: the supernatural, the unseen, the never was. With it, the Jew was able to infect a whole civilization, as surely as the bubonic plague in Medieval times. Infect it, spread it, conquer it. This, I understood from my earliest days in Vienna: that the Jew was a carrier of plague, a psychological schizophrenia that had spread from the Middle East to the farthest reaches of Europe. But once known to me, once I had grasped this fundamental kernel of wisdom, this incontestable Truth, I willed myself to rise from poverty and depression and roll back, in the aftermath of World War 1, the nefarious Jew and his communistic spread into the heart of Aryan Man, thereby laying the foundation for the European's everlasting salvation and glory.

"But the plague had spread to far by then, turning European man against European man with a poison, alien faith, until even the mighty German, like the mighty Roman gladiator before him, could no longer withstand the onslaught from those who should have united with him, but did not..."

Adolf Hitler paced before his audience, then paused, and every mouth held its breath, even as every heart beat as one. Then, raising both arms as if beseeching the very vaults of heaven, he said: "That is the legacy of the Jew. But now, here, in this second reality far from the racial quagmire of Earth, we can conquer still. Conquer the stars themselves, forever leaving the Jew behind.

"For this is our destiny, all you who stand before me. We of European blood, be it German or Irish, Dutch or English, French or Spanish, we are forever united, flesh unto flesh, heart unto heart, steel unto steel - together forging one mighty sword thrust against the eternal stars!"

As the crowd roared, as once, long ago, it had roared in the shadow of the German eagle, the applause was deafening. But this time the audience roared for all the peoples of Europe, and Adolf Hitler, reborn, stood bathed in the sound of its everlasting glory. Eva, he thought, my dearest, beloved Eva...if only you could have stood at my side tonight. For no greater tribute have I ever received than this, no greater love do I embrace..."

Then, turning, he proceeded to walk off the stage. But something has been left unsaid, he sensed. Something that would jolt the crescendo of applause to even greater heights, heights yet unreached. Suddenly remembering, he halted - pivoting sharply on his heel. For a breathless moment both he and his audience beheld each other, expectant, waiting, hoping...

Then, raising his arm, his ice-blue eyes piercing the depths, Adolf Hitler shouted to the heavens: "Sieg heil!"

In unison, the audience jerked their arms heavenward, exploding in joyous, ear-shattering rapture, the walls shaking with their thunderous response: "Sieg heil!"

In response Adolf Hitler raised his arm thrice more, and thrice more he followed each salute with another:

The die was cast.

Man would reach the stars.

And Adolf Hitler would lead the way...