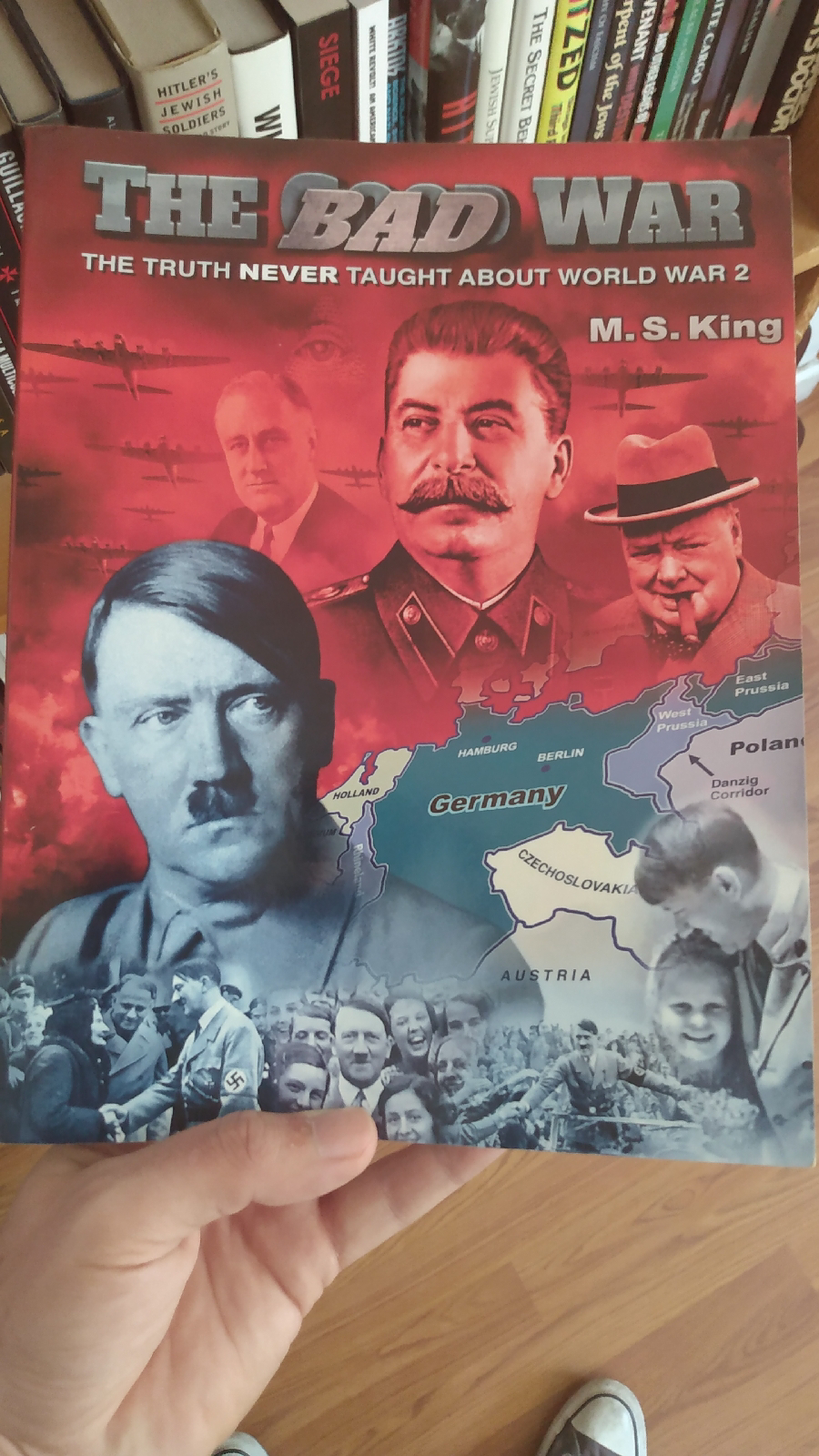 The Bad War is one those controversial books I was reluctant to pick up. Beforehand my intellectual journey was accompanied by all the wrong history books, authored by all the usual (((suspects))). After reading the mixed reviews on Amazon, I eventually convinced myself to embrace this book with an open mind. After all, if I remained close minded I wouldn't be here right now. So I proceeded to make the purchase, and commence my studies. This was before the book fell victim to Jewish Censorship.

Initially I read this book as skeptic, thinking to myself, yeah, I better fact check that, sounds like bullshit. So as I read the book in its entirety I literally fact checked everything. In the end I could not refute any of the salient arguments and facts mentioned throughout the 242 pages. Suffice to say, my entire world view changed after that, and I found myself struggling to accept all the years of lies and deceit propagated by the Jewish dominated media and education system.


The Bad War differentiates itself from the plethora of others by depicting Adolf Hitler as the good guy, and actually offering an honest portrayal of WW2. Everything we've been taught by the Jewish propaganda machine fails to stand up to scrutiny, as the reader acquires answers for the elusive Jewish Question. This was a bold move by the courageous author who risked being categorized as an evil Nazi on the ADL hit list for his efforts. I thought Jews hated lists, the one by Schindler comes to mind, but I digress. We've been deceived for decades now as the Jews propagated the genocidal Nazi myth as a weapon against white people. That ends here, Jews.

There is a literal wealth of knowledge in this book. For example, I was incognizant of Woodrow Wilson killing America by enacting the Federal Reserve Act which put our monetary system in the hands of Jews. And I definitely never heard of Jacob Schiff, the Jewish Wallstreet banker who financed the Communist revolution. Nor did the name Edward Bernays ring a bell. Not only was he the nephew of Sigmund Freud, but also the father of American propaganda. In fact, Bernays is responsible for portraying the American war effort as a holy crusade to make the world safe for democracy, while simultaneously promoting hate-filled propaganda directed towards Germany and its Emperor, Wilhelm II. This book was also my introduction to the Balfour Declaration.

As for Hitler, the man only wanted the best for his people. Upon becoming fuhrer of Germany in 1933 he implemented these policies:

The miserable, insatiable Jews kvetched vigorously over this, then formally declared war on Germany. In fact, Theodore N. Kaufman, the disgusting Jew, authored a book entitled Germany Must Perish. This is another Jew I never knew existed before reading The Bad War. The bottom line is, if the kikes can't subvert your country or nation after they've been granted equal rights as alien citizens, they'll guarantee its destruction. The fire bombing of Dresden on Ash Wednesday is a prime example. This is mentioned later on, though.

Hitler also made numerous calls for unconditional peace, he even reached out to Pope Pius XXI to facilitate these measures only to be rebuffed every time by France and Britian.

Another odd coincidence I noticed is how often Jews changed their legal names. I correlated this with the alleged victims of the holohoax and thought to myself, yeah, that's a way they could account for the 6 gorillion. Speaking of the greatest myth of the 20th century, it's addressed here and debunked. Hail typhus!

For the sake of brevity, let's just say if anyone was curious or seeking information on the Jewish Question this book will sufficiently offer irrefutable answers.

And for those of you who quest after knowledge and truth on the Hitler Question, I can personally assure you this book will alter your mainstream Jewish perception of the man. Now that's not to say all will addressed or answered here in 242 pages, but it is an ideal place to begin your red pilled journey. You'll be shocked and utterly appalled by all that was left out of the picture, along with all the misinformation, and crimes against humanity committed by God's Chosen People.
at May 24, 2020