Negro Riots Are A Mitzvah 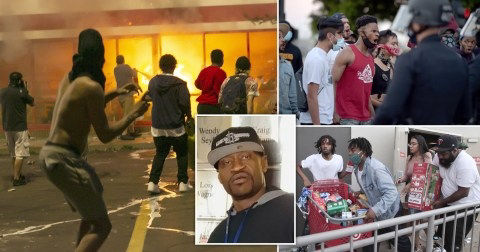 Jews rejoice when blacks burn down cities and attack innocent white people. This is all part of their protocols, hence the actions of Jewish faggot, Jacob Frey.

Is there any rational reason for a mayor to demand cops to stand down against overzealous niggers who are literally burning down entire communities as they loot and riot? Yes, it's a fear tactic meant to keep whitey in check as everything he once loved is stripped away from him. This is the Jews way of telling the white man to shut up and take it before he releases the niggers who are under his kosher thumb. Most of our people are already deathly scared of negro aggression, which is why we've witnessed the advent of white flight throughout the decades.

Does one dead nigger justify burning down a city? Absolutely not! Black lives only matter when they're expedient to Jewish dominion. However, this is the manifestation of negros being true to their nature. It's what they do, and quite frankly, what they've been doing for a lifetime. I'm not at all surprised.

Whites have been victims of police brutality in the past, in fact, a black cop unjustly murdered a white woman, did my people take it to the streets and commence to burning down that city? Absolutely not. Why? Because we're not uncivilized niggers. And these cities were also built by us, so burning them down would be counterproductive and self-denigrating.

Jews have been exploiting blacks since they transported them to America on their slave ships. Blacks are too low IQ to comprehend this, which means the worst is yet to come. If a Jewish mayor tells the police to back off, this puts my people in a terrible predicament. When the police fail to uphold the law something will have to be done. We can't just collectively sit idle as they come for our daughters and shekels. This is a literal race war, we have every right to protect ourselves.

Jews want our children dressed in drag, our guys hooked on heroin, our women fucking niggers, our parents divorced, and our grandparents ruthlessly beaten in retirement homes. The Jew relies on propaganda and negro aggression to accomplish these goals, for he is far too feeble to carry them out on his own.

Blacks hate white people, even the somewhat decent black preachers possess an intrinsic Anti-White bias. They also consider themselves to be their own nation within America. The Jews categorize this as kosher though, since blacks are a tool to enslave whites.

Listen up, Whitey. It's only getting worse. There are talks of blacks uniting with other minority groups to combat White America. These are the machinations of what I once considered decent black folks. Please view the video below, it's from the School Of The Hebrews JewTube channel.