Honoring The Alt-Right: A Lesson In Collectivism 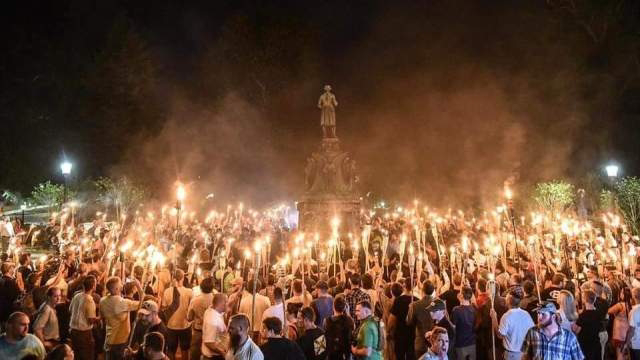 Before infighting became a prominent component within the Pro-White sphere, we had a cohesive movement entitled the Alt-Right. This was a time when multiple factions, and ideologies, all united under the 14 Words. The (((culprits))) responsible for the decline of the West were relentlessly attacked as we collectively endeavored to protect what our ancestors struggled to create. We were active not only on the web, but also on the streets. Securing the existence of our people and a future for white children was embraced with severity and gravitas.

This was a time before the ADL and SPLC sponsored censorship of Twitter and YouTube prevailed. As Richard Spencer once said, "We memed our way into existence". Through virtue of sheer wit and humor, combined with irrefutable facts, a mass enlightenment permeated these social media platforms, garnering a large following to combat the opposition. Oy Vey was heard around the globe.

It was through the Alt-Right that I originally acquired the knowledge of the Hart-Cellar Act of 1965. This was one of the primary focal points of the movement, and also one of the most consequential things I've learned in the past decade. It enabled us a new perspective on the Great Replacement. This put Jews at the forefront of our misery and inevitable decline.

Whites continued to be the punching bag of society, thank God for that. It inspired us to reject radical individualism, and finally embrace identity. So when Jews and their fellow multiculturalists bolstered their aggressions by endeavoring to remove the statue of Robert E. Lee in Charlottesville we decided to make a stand.

If it wasn't for Richard Kessler, Unite The Right may have never transpired. The man to this day has my utmost respect. It took substantial amounts of courage and devotion to make Unite The Right come to fruition, this is something that needs to be honored in the history books. Hail Richard Kessler! He sacrificed more than most for his people.

Unite The Right was a showmanship of cohesion and power. Pro-White people from all across America marched in unison, regardless of ideology, against the Jewish hordes of decadence and multiculturalism. Carrying tiki torches they collectively chanted in righteous indignation "Jews Will Not Replace Us!" The inevitability of violence eventually erupted, but it was precipitated by the left. I repeat, my people were not the aggressors. However, the rules of nature were sustained as measures of self-defense were enacted. The Judea-Left took a beating that glorious day. In the end, a nigger loving fat bitch had a heart attack and perished. Needless to say, my side was blamed and denounced as dangerous, genocidal maniacs over the loss of one gluttonous race traitor. Had James Fields never been viciously attacked in his car by tranny loving faggots with weapons this wouldn't have happened. He's currently serving a life sentence.

Unite The Right had the opposition shitting their skinny jeans as they screamed for help. It also personified the determination and will of my people to collectively resist Jewish Supremacy. In fact, the Robert E. Lee statue remains in place. This was a time of great fervor and cohesion. Something that was soon to vanish for years to come.

The repercussions of Charlottesville are still felt to this very day. Richard Spencer recently lost a case in civil court, as did Richard Kessler. Political prisoners who engaged in self-defense are still rotting away in jail cells. A man named Andrew Dodson was doxxed, and eventually lost his job over being an advocate to his people. He committed suicide. The list goes on and on.

Regardless of the consequences of White advocacy, Unite The Right was an overall glorious event, one that I'll never forget. My people did great work, conducting themselves accordingly amongst the violence and suppression. I can still hear them chanting: "Fuck You Faggot!" A personal regret of mine is not being able to attend the event. I'll never know what that feeling of solidarity felt like.

The aftermath of Charlottesville is everything the Jews could ask for. We went from marching like Roman Legionaries in the most legendary rally of the 21st century to infighting in an echo chamber. Our valor and solidarity is nothing but a memory. We literally went from naming the Jew to accusing everyone on our side of being Jewish. We went from combating the opposition to combating ourselves. We took 14 steps away from the goalpost only to hit the Rubicon. Now what? The days of reaching mass effect on the internet are over. The Jews have shut us down on Twitter and YouTube, minimizing our potential for growth as a movement. The thing is, we stopped growing as a collective. Immaturity, paranoia, cowardice and inactivity have rendered our struggle useless. The Alt-Right was less divisive and more efficient than the plethora of options we have now, e.g. White Nationalism, The Third Position, Christian Identity, Southern Nationalism, Paleo-Conservatism, Nationalism, Catholicism, National Socialism, Wigger Waffen, Paganism, etc. Dogma now takes precedence over the 14 Words. Somewhere along the line what mattered most was forgotten. As long as this nefarious trend persists we can all collectively wallow in defeat. Emulating the multiculturalism we claim to oppose isn't a solution to the White Genocide.
at May 10, 2020

What did we learn from this defeat? I could answer that but I want people that read this to think about it.

Every defeat leads us closer to Victory! Because we learn from failure!

How did Hitler keep people in a cohesive mode and rebuild a broken Germany?
His book "Mein Kampf" gives us a lot of answers. How many Nationalist have read Mein Kampf?

When we get organized as Germany did and learn from their and our mistakes then we will be successful.