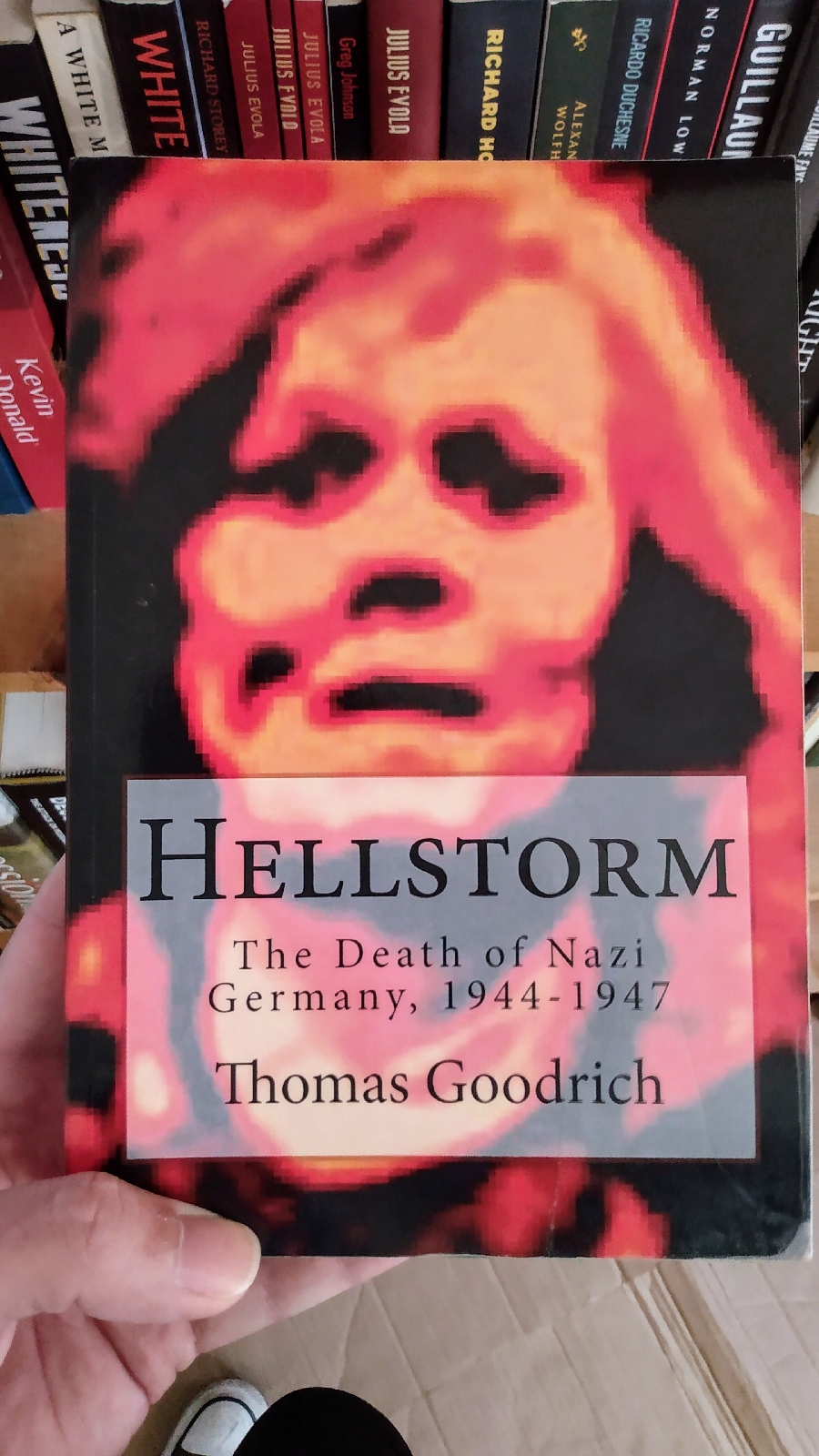 One of the many impediments of living in an occupied country is the miseducation of the populace. When American's think of World War 2 they automatically correlate that epoch with the suffering of Jewish people. We've been indoctrinated since grade school to hate Hitler and sympathize with the persecution of Jews, who we are led to believe did absolutely nothing wrong throughout history. God's Chosen People are infallible, bigot!


Hellstorm is a difficult read. This can be attributed to the horrendous content of the narrative. It took me an extra month just to finish the book, and it's not that large of a text to begin with. Genocide, rape and catastrophic destruction is a touchy subject for most. It definitely was for me. I found the entire experience heartbreaking, yet necessary for my intellectual growth.

The fire bombing of Dresden began on the night of Ash Wednesday, 1945. A blatant manifestation of Jewish hatred, if I ever saw one. People fortunate enough to escape their homes would find themselves melting I'm the smoldering asphalt as they suffocated to death or were set ablaze by encroaching fire. An additional bombing ensued around noon of the following day to furthermore decimate the innocent civilians of what was once considered the Gem of Europe.

As the Soviet's invade Germany we learn about the Commissars, who were exclusively Jewish and far more contemptuous than your average Slavic soldier. Their malice and cruelty is a documented fact within these pages that's been concealed from the mainstream narrative of Jewish pacifism and suffering. There's a specific part in this book where they mutilate hundreds of Germany's most beautiful young women and teenage girls with knives. I avoided this book for a few weeks afterwards for the sake of my mental health.

We also learn about the second Mongolian invasion from the far eastern part of Russia. Stalin sent his absolute worst into Germany, and the catastrophic level of rape experienced by German women is unparalleled in the history of Europe. Size, shape, and age mattered little to these disgusting barbarians. They raped without prejudice, sometimes they even engaged in necrophilia. There's records of women having to endure entire battalions of rapists all night long as their children were forced to watch. I almost threw this fucking book against the wall after reading that.

Believe it or not, more civilians actually perished after the war through contrived starvation, i.e. Morgenthau Plan. Although it was initially scrapped by Truman and renamed, it basically accomplished the same thing. German civilians were forced into concentration camps where they faced starvation and torture as the Allied Soldiers ate like gluttonous pigs. During this time period German women were selling themselves for candy bars.

There's an abundance of deplorable, forgotten history within the pages of this must read book by Thomas Goodrich. I've only scratched the surface here. Upon completion of Hellstorm the reader will now possess the aptitude to view World War 2 through European lenses. The Jewish copyright on suffering, and its formidable power over us is abated and less sufficient. We can now acknowledge if anyone experienced a Holocaust it was the innocent civilians of Dresden. Your perception will forever be altered after reading the entirety of Hellstorm. This book sets the record straight, and also has the potential to emancipate the reader from unjustified guilt.
at May 07, 2020

Another good one is "Other Losses" by James Bacque. It goes over what the allies did to the Germans following WW2. It goes over the Eisenhower Death Camps.

Thomas Goodrich also has a book called "Scalp Dance: Indian Warfare on the High Plains, 1865-1879" It goes over what white people settling the plains went through with the Native Americans. It dispels the myth of the "noble savage" and the romanticized image of the Indian. It displays them as they truly were, Savages.

You can also get books destroying the Holocaust Myth. There is this series out there called "Holocaust Handbooks" it is extensive and completely eradicates the "Holocaust" with verifiable facts and evidence.

I'd also recommend the book "The Dispossessed Majority" by Wilmot Robertson. it is rather old but it still holds its own its is very good. He also has a smaller book called "The Ethnostate" which is also good.

If your interested in Theology there is a great site out there called "Faith & Heritage" it is a Christian ethno-nationalist site. It calls the movement "Kinism" it basically trys to revert back to the Christianity of our Forbears and dispels the heresy of the modern multicultural church. A good article series they have is "The Blackwashing of Church History" Here is a link: http://faithandheritage.com/2018/07/the-blackwashing-of-christian-history-and-beyond-part-1/

Also here is an article on "The Biblical Defense of Ethno-Nationalism"
http://faithandheritage.com/2011/01/a-biblical-defense-of-ethno-nationalism/

I think you'd be interested in these things I know I sure was.