Ethno-Nationalism In Fiction: A Mighty Fortress 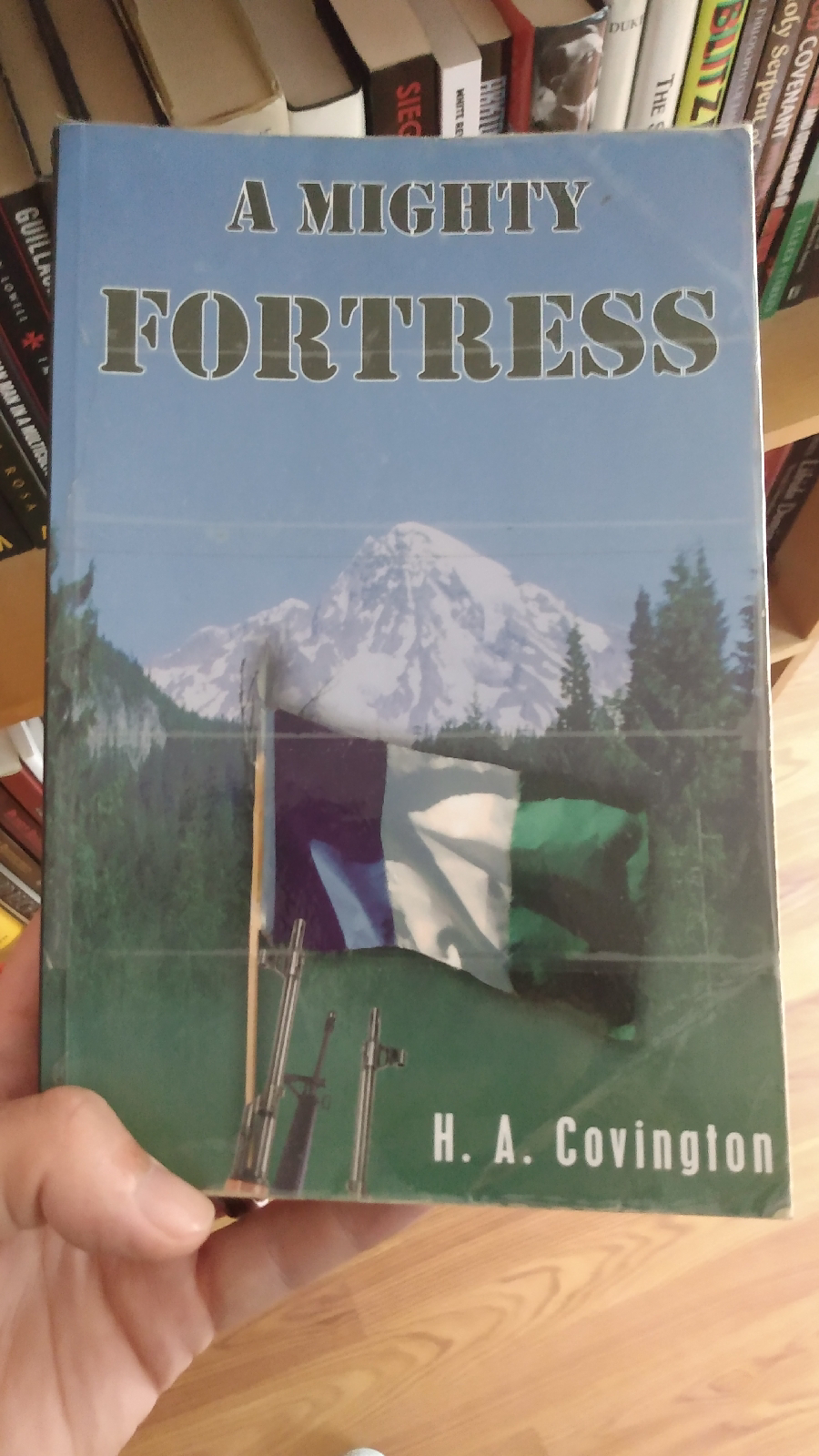 A Mighty Fortress is the third book in the Northwest Front Series in which the goal of securing the existence of our people and a future for white children is accomplished after a decade of bloody warfare. It's a riveting read, oftentimes cathartic. With a minutiae of imagination it can also be perceived as a training manual on how to resist and possibly overcome Jewish Supremacy.

Below is the inspirational declaration of independence featured on pages 233 - 236.

The Moral and Political Basis for Northwest Independence

1. The United States of America, in its original form as envisioned by the Founding Fathers, was a political entity created by and for white people. The white race made America what it is today. American law and the United States Constitution are derived from Anglo-Saxon common law, going back to the Magna Carta. Such concepts as democracy itself and the rule of law are based upon European thought, not African or Asiatic.

2. The United States of America as it exists today has only the most remote and tenuous historical connection with the country and the system of government which was originally established and envisioned by the Founding Fathers. The United States was never intended by the Founding Fathers to be multi-racial, or multi-cultural, or diverse. It was intended to be a national expression of what was viewed at the time as the Manifest Destiny of the white race. This is made abundantly clear by contemporary documents from the time of the Founding Fathers, in the writings of men such as Thomas Jefferson, George Washington, and Benjamin Franklin. Indeed, the only references to non-whites in the Declaration of Independence and the Constitution were in passing, where Indians are referred to as enemies of the colonists and where for census and apportionment purposes, blacks were considered to be three-fifths of a man.

3. The present government of the United States of America has become irredeemably corrupt, and its continuation in power is antithetical to the pursuit of life, liberty, and the pursuit of happiness. The United States has become tyrannical, poisonous, and deeply repulsive to every concept of human decency. America today is riddled with crime, corruption, poverty, sexual perversion, unemployment, ill health, mistreatment of the elderly, the destruction of the national infrastructure, a dysfunctional educational system, and national malaise and demoralization. America today has been bankrupted and morally poisoned by a series of foreign wars fought on behalf of the Jewish people which are in fact counter to America’s interests, wars which have been as pointless as they were immoral. These problems simply did not exist to any significant degree in the past, when the white man was in charge.

4. It is clear beyond any debate, that modifying the racial composition of America away from the dominant white society that it was as it rose to power, towards a mixed, racially diverse society, has been catastrophic, an unmitigated disaster. Diversity does not impart strength; it creates weakness, division, chaos, corruption, and deep social
sickness. Diversity has ruined America. Even if all races were exactly the same, if
there were no differences whatsoever, the fact that whites created America as we
know it today means that we now have the right to demand that at least a portion of
what we have created be set aside for our exclusive use. We did not create this great
and wealthy country just to hand it over to an endless flow of mud-colored
immigrants who have done nothing to earn what we have made, and who do not
belong here at all.

5. For the past century, all peaceful attempts to alter and reverse the racial and social policies of the United States have failed. Petitions have been ignored. The electoral and political process has been undermined and corrupted, and turned into a weapon of genocide against America’s white inhabitants. The judiciary has become an instrument of racial and social tyranny. The United States has persistently refused to respond to all peaceful and legal efforts at reform. All peaceful and legal avenues of redress having failed or been closed off, it is therefore not only the moral right, but the
profound duty, of all Americans of European descent to take up arms against the United States and apply such force and coercion as may be necessary to compel the government of the United States to change its wicked and destructive behavior, and to punish those who are responsible for such behavior.

6. Based upon the extensive history of the black and mestizo races, it is clear that
they are not capable of creating or maintaining an advanced society. It was not Africans who invented such things as the wheel and gunpowder, forged steel,
domesticated the horse, sailed the world on voyages of exploration and conquest,
invented aviation and charted the mysteries of the human body. It was Europeans. Third World immigration eventually means a Third World country. Racial integration and diversity is like mixing horse manure and ice cream. It does wonders for the manure, but it doesn’t do much at all for the ice cream.

7. The loathsome perversion of homosexuality is absolutely unacceptable in any civilized society. It must be exterminated with fire and sword. This is not something that is subject to debate or argument. It is something that decent men simply do.

8. The unspeakable practice of infanticide by abortion is absolutely unacceptable in
any civilized society. It must be brought to a halt immediately, and those who are
guilty of trafficking in or profiting by this horror must be tried and punished for
premeditated murder. This is not something that is subject to debate or argument. It is something that decent men simply do.

9. The moral perversion known as feminism is destructive of the family, which is the basic building block of society, because it teaches the false idea that men and women are somehow competitors and enemies, and that the bearing and rearing of white children is somehow shameful. No more pernicious, poisonous and humanly destructive lie can be imagined. There must be an immediate return to sanity and the nuclear family headed by a married couple, husband and wife, as the basic building block of society.

10. There must be a final solution to the Jewish question.

11. The number of whites, as a percentage of world population, is now down into the
single digits and falling fast. There can be no doubt that the white race is in danger of literal, physical extinction. All of the White nations on earth are now accepting large numbers of nonwhite immigrants. The only one of the three major races of earth that is in real danger of extinction is the white race. It is absolutely essential that the white race acquire a Homeland of its own, some place on earth where white children can be born and raised in physical and spiritual safety, and where our numbers may be restored and the threat of racial extinction overcome.

12. History, economics, demographics, geography, and moral justice dictate that this worldwide Homeland for all the Aryan peoples of the world be established in the
Pacific Northwest, the land which is hallowed with the blood of martyrs such as Sam and Vicky Weaver, Bob Mathews, Pastor Richard Butler, the Singer family, and now all of the comrades of the Northwest Volunteer Army who have perished during the past five years of armed struggle. While the Northwest Volunteer Army recognizes that we lack the power to overthrow that government completely and to take back our country in its entirety, for the sake of not only our own race but all of humanity, it is essential that the United States and the ruling élite which now controls the United States be clearly defeated in the eyes of the world, and that at least some portion of the North American continent be detached from Federal control and returned to the original white people who created the world as we know it. The coming conference at
Longview will have one of two results, either the establishment of the Northwest
Republic, or else a return to combat operations against the United States government on the part of the NVA. There is no third alternative.